The incident on a Southwest flight in mid-April has bothered me terribly. It has troubled me deeply because it is a result of ignorance and a lack of awareness of the other. How easily we create stereotypes out of fear – a fear which stems from a place of not knowing our neighbours.

When ever I travel to a new country the first thing I do either just prior to arrival or on arrival, is to learn how to say thank you and hello in the local language. I have found that the reaction I receive when I am able to extend this simple gesture is worth more than the thousands of more words I wish I could utter. The expansion of English as the global language for communication has certainly made travel very accessible for so many, but it has also created a sense of what I can only term as arrogance. I have too often encountered travelers who are shouting in English at a bewildered shop keeper or waiter, thinking that by raising the volume of their voice they will somehow make themselves understood.

Language and culture are intricately intertwined. Language carries meanings and references beyond itself because the meanings of a particular language represent the culture of a particular social group. We can therefore not understand a culture without having direct access to its language. Learning a language is not only learning the alphabet, the meaning, the grammar rules and the arrangement of words, but it is also learning the behavior of the society and its cultural customs. Culture is the whole from which the particular language is extracted, and hence by being unmindful of people ability and indeed right to converse in their mother tongues, we build walls around ourselves. These walls in turn create a situation where people have a choice of either to conform to what is seen as ‘culturally’ appropriate or face exclusion. I was deeply troubled after I spoke with a group of young Iraqis and Palestinians in London after the 2005 attacks as they relayed with all certainty that they would never teach their children Arabic as this would single them out. Is this the way we wish to proceed? A world where being linguistically different, just one of many cultural traits which can differentiate an individual, isolates and  ostracises. It is not only Arabic speakers who make this linguistic choice, indeed there are many Asians here in Vancouver who only speak English having never been given the opportunity to learn their parents native tongue.

I return to my original motivation for writing this post and add that I do not expect everyone to learn all languages – this would be impossible and meaningless. I do implore however that we must make a conscious effort to be aware that other languages exist in our society and that their speakers are not all ‘terriorists’! We should remember that many of the ISIL recruits are not native Arabic speakers and we can therefore not make assumptions based on linguistics. Educate yourself and ask the person beside you what language they are speaking – ask them about themselves – introduce yourself – reach out – break down the linguistic barriers…

“Culture, then, began when speech was present, and from then on, the enrichment of either means the further development of the other” A.L.Krober (1923).

The famous line from Romeo and Juliet

“What’s in a name? That which we call a rose
By any other word would smell as sweet.
So Romeo would, were he not Romeo called,
Retain that dear perfection which he owes
Without that title”
is one of the most quoted lines when we think about the power of names and what we call objects are people. I agree and disagree with Shakespeare, indeed a rose does smell as sweet no matter what we call in in any language – ورد – la rose – una rosa – ar rós; but a rose is a rose because that is the name it was given were we to call it a Lilly there would be much confusion. I am returned to a conversation had nine years ago over lunch at the University of Sussex after a class on the meaning of social constructivism. We were debating the name given to a ‘mug’ and how name and function become one the same. We contemplated creating another word that our group would attempt to apply to the object used for consuming tea or coffee, but after a week’s trial we shelved it as a failed experiment. The reason was that we would have had to convince everyone around us and whom we interacted with to use the same word.
I am reminded of this issue of naming objects or in my specific discussion case people, in my attempt to understand the cultural practice of adopting a different name. What I refer to is the cultural custom where an individual gives themselves a name which they consider to be more culturally ‘appropriate’ to the context they find themselves in. I know how this transpires as I have been a participant in it. Aged 10 growing up in Sudan a military Islamic government had taken hold and the society was awash with Islamic symbology. I had lived there for 6 years already without feeling any necessity to be referred to by anything except the name given to me at birth. But I was a stubborn child on the verge of adolescence and I was determined to be a part of the wave sweeping the country – how naive I was. I selected a name I considered more appropriate and required everyone to call me by that name. We left Sudan when I was 12 and the name remained there a symbol of those 2 years of change and turmoil for the country – one from which it has not yet recovered. I have been back three times since leaving aged 12 and everyone always refers to me as Siobhán and not by the name I choose for those final two years.
I use my own memory to raise the question that has intrigued me since first going to China in 2000 and especially the past two years having a large number of Chinese students in my courses at UBC. An ‘English name’ would appear to come hand in hand with speaking the language. Despite several attempts to encourage students to educate me in the pronounciation of their names, their insistence remains on the use of their ‘English name’. I find it a prohibitive process when grading assignments to associate a face with an official name and with an ‘English name’. Do not misunderstand and think that I am critiquing the practice, I am endeavouring to comprehend it. How do my students feel being referred to by different names depending on the context? Does it change their approach or behaviour? I contemplate this on a daily basis. I would encourage you to share your experiences here or privately with me via email siobhan@pluralityspeak.com 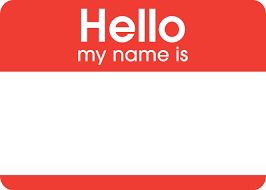 This entry is in a sense a practical extension of my previous entry on being cultured. Multiculturalism is a difficult concept for those who work and study immigration and the impact of immigration on receiving societies, but attempting to convey some of this complexity to students is certainly a challenge. We are faced with concepts of a society which strives towards assimilation such as the US and France, while other societies such as Canada and the UK have pitched a policy of multiculturalism.

The distinction between these two concepts is one that has plagued my own academic career and research projects I have been involved in.  If the ultimate goal is cultural homogenisation and can “Can liberal pluralism be exported?” (Kymlicka 2001) . Berry captures this in an image in an online article from 2011.

I would suggest that Berry’s Melting Pot visual is equated to that of an assimilation model, there is one dominant society, while immigrant groups or other minorities remain on the margin because there is not process in place for communication. The circle on the right represents a model of multiculturalism where there is a national framework of institutions which accommodate the needs of all groups in society. The premise being that there is no dominant group but that all groups are ethnocultural with equal cultural rights in the society.

Both models have several drawbacks, for the assimilation model cultural differences are largely ignored except possibly through a acknowledgment of increased diversity in terms of food or music – tokenistic gestures towards a country’s different cultural groups. This in my opinion is the case in Germany, France and the US. For the multiculturalism model there is a shift almost to the other extreme of the spectrum where a hyper-awareness of cultural differences and an attempt to accommodate all of these means that a country as a whole loses a sense of identity and creates extremely segregated groups who are all tolerant of each other, such is the case in Canada.

The task for my international students was to illustrate to me their understanding of multiculturalism in the city of Vancouver. Vancouver is often refereed to as a cosmopolitan city by visitors, by the media, and by academics (see chapter by Dan Heibert).  If we define cosmopolitan as “including people of many different countries,” Metro Vancouver is the fourth most cosmopolitan major city on the planet. 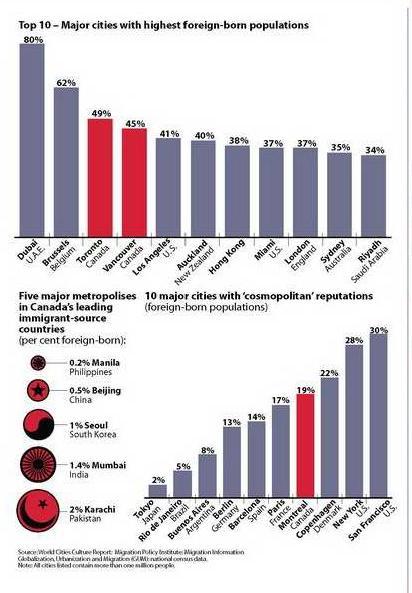 More than 45 per cent of Metro Vancouver residents are foreign born, according to the 2011 census. The infographic above indicates that there are only three major cities on the globe that have a higher percentage of foreign born residents, they are Dubai, Brussels and Toronto. However, if we look to the bottom graph we see that Vancouver does not even feature in the top 10 as a city with a ‘cosmopolitan’ reputation; nor do Dubai, Brussels or Toronto. So simply have a large percentage of foreign born does not maketh the city ‘cosmopolitan’ or multicultural despite what it might say on paper.

I asked my students to create a walking tour for me in the city which should take me one hour and provide me with an understanding of how multicultural they see Vancouver, or indeed what aspects of the city made them see a diversity of cultural in the city which was not their own. I provided them with the instructions on how to build using Google Tour Builder and encouraged them to think beyond the socio-romantic categories of food, art or music, or at least to use their imagination beyond the norm. The results really astounded me and gave me a new understanding of the different perspectives groups of students have on the city. I include the best four below with the students’ permission. I would strongly encourage the application of the assignment in different cities – who knows maybe we can set up a website of comparisons (contact me if you think so).